This vivid hibiscus grew in my front yard.

Unfortunately the tree has died since but

this photo I took is a testament to the loveliness

of the flowers this tree produced.

The beauty of nature is a spiritual wonder. 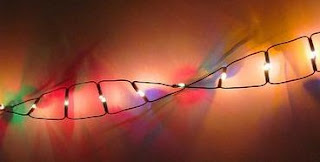 Russian biophysist, Pjotr Garjajav, and his research group have been investigating the scientific basis for phenomena such as clairvoyance, spontaneous acts of healing, the success of affirmations, auras, and the potential of groups of people to influence weather patterns through their intention. Now, this research has revealed that DNA can be reprogrammed by words and frequencies-- opening up a whole new arena in medicine.

As we know, 90% of DNA has classified as "junk DNA." The Russian scientists joined linguists to explore this so-called "extraneous" DNA and found that the genetic code "follows the same rules as all our human languages"--indicating that human languages are actually a reflection of our DNA.

Through exploring the vibrational behavior of the DNA, Russian scientists were able to use certain frequency patterns to alter the genetic information itself. Even more astounding, the experiment proved that one can use words and sentences to influence DNA. This explains scientifically how the body can be programmed by language, words and thought-- finally lending credence to the use of affirmations and hypnosis.

The scientists also proved that using frequency can repair chromosomes damaged by x-rays and actually reprogram DNA. By applying vibration to the DNA information patterns, they successfully transformed frog embryos to salamander embryos.

Equally exciting is the news that the scientists found out that our DNA can produce magnetized wormholes-- "tunnel connections between entirely different areas in the universe through which information can be transmitted outside of space and time. The DNA attracts these bits of information and passes them on to our consciousness." This lays the groundwork for proving hyper communication or psychic phenomena, and understanding where that information comes from.

DNA is like a superconductor that can store light and thus, information. Wormholes are normally highly unstable and maintained only for fractions of seconds. But under certain conditions, stable wormholes can organize themselves into vacuum domains where gravity can transform into electricity. Vacuum domains are "self-radiant balls of ionized gas that contain considerable amounts of energy." They have been seen in the sky, oftentimes mistaken for UFOs. The Russians have discovered that these balls of light can be guided by thought. These vacuum domains can also be produced in our brains. This explains the halos around spiritual teachers and light effects appearing on photographs, especially involving healing work. These phenomena have to do with wormholes and hyper communication-- with energies from outside our time/space structure.

In the past, earlier generations that had such experiences with hyper communication and visible vacuum domains spoke of angels. We still do not know what forms of consciousness we have access to when using hyper communication. But this research is bringing us closer to understanding the infinitely complex nature of our reality.

Image by kyz on Flickr courtesy of Creative Commons Licensing
Posted by S.D. at 3:26 AM

We respect your privacy. Your information will not be shared, rented, or sold to any third party.

I took this photograph while bushwalking. Nothing like "drinking in" nature to heal the mind and spirit!

WELCOME TO MY BLOG!

Life is amazing! Difficult sometimes, but still amazing. In my capacity as a spiritual counsellor and personal development teacher, my aim is to assist, providing timely guidance, insights, encouragement and the necessary spiritual and analytical tools to help individuals make the most of their distinctive and miraculous lives.

This blog is an extension of my spiritual work, giving everyone a chance to share inspiring information, comments, guidance, quotes and whatever helpful or important information, you or I may discover, to make this world a better, harmonious place, and our lives a happier, more fulfilling journey.

Thank you for visiting my blog. Whether you have a comment or suggestion, or just want to say hello, I would love to hear from you.

I have over 25 years experience as a spiritual counsellor, life coach, personal development teacher and author. I have authored and co-authored books including "The Source of Life" and "One Page Wisdom" and "The Power of Runes" a comprehensive book on the history and use of Runes. For further details, check out my website www.sarinadamen and join me on twitter, facebook and pinterest.
"Be glad of life because it gives you the chance to love and to work and to play and to look at the stars." - "Henry Van Dyke